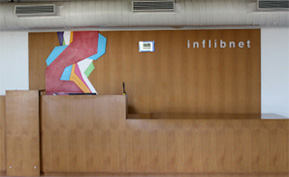 Information and Library Network (INFLIBNET) Centre, Gandhinagar is an Autonomous Inter-University Centre (IUC) of University Grants Commission, New Delhi (Ministry of Education, Govt. of India). It is a major National Programme initiated by the UGC in March 1991 as a project under the IUCAA, it became an independent Inter-University Centre in June 1996. INFLIBNET is involved in modernizing university libraries in India using the state-of-art technologies for the optimum utilisation of information. INFLIBNET is set out to be a major player in promoting scholarly communication among academicians and researchers in India.